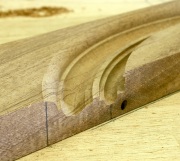 Last week I worked on the arched moldings for my clock and left you with going back into the shop to used different setups and a new design. It worked. Kind of. It turns out that I did use my Micro Fence circle-cutting jig, but I had to also use my shop-made jig, too. The Micro Fence system did not allow me to get as small as I needed to make my moldings. The opening photo is that of the second profile as it came off the router. (You can enlarge the photos if you click on them.)

This week I began from the profiled arched moldings.

Three things to do: cut the arched pieces from the stock, make a set of straight moldings to match what I had in the arched set and work the small bead of the moldings. At the band saw, I cut away the waste to free the almost completed arched moldings. A quick trip to my disc sander (the outside edge) and my spindle sander for the inside edge and I was ready to begin matching the profile on some straight stock.

the ends that met in the middle of my setup. Using that end, I worked through the profile using the same router bits used to make the arched pieces. I had to set the depth of cut and the fence location to accurately match the design. It took about two hours to create a matching design on my straight stock. The last cut was the 1/4″ round-nose bit profile. With its work complete, I could rip the molding pieces free.

The last step was to create the 1/8″ bead on each of the sticks of molding. 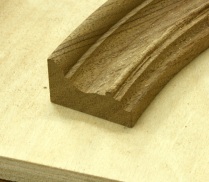 My first thought was to carve the pieces. I grabbed a small, bent-back carving gouge from the roll and got ready. After a couple minutes, I knew this was not the answer. Plan B – which should have been Plan A in retrospect – was to make a scraper for the task. Simple enough. I drilled an 1/8″ hole near the edge of one of my scraper blades, then ground it (sanded it with my spindle sander) so only half the profile showed. Work began on a straight piece of stock. Scrape. Scrape. Scrape. Done. It was too easy. The second, third and fourth pieces of straight molding went just as quick. But what about the arched pieces? I clamped one in my vise and went at it. The results were just as great and just as quick. The finished molding is shown above right, and the process is shown below. (The inset photo is the bead scraper.)

If you run into this need, make a scratch beader your Plan A. It’s way easy to do. And it works.