Inlay Tools With A Twist 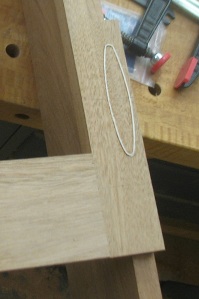 Last week I shared the two oval designs, one of which I planned to use on my tall clock. Which did I choose? I selected the oval drawn using Freddy Roman’s method from the Popular Woodworking Magazine article. The other oval looked almost pointed when routed. But with choosing Roman’s method, there was, of course, a problem.

If you have followed any of the work I’ve done with string inlay, you know that I prefer to use a heated pipe section to bend my string – I have tried to use a solder iron, but have found it much more difficult.

Take a look at the finished oval shown the photo above. Look closely at the round ends. Those ends are way smaller than any pipe section I have in stock. I shot over to my favorite hardware store for a new section, but found nothing acceptable. Was I resolved to use a solder iron and power through? Don’t think so. This is when they say you should think outside the box, so I did.

I went to my shop drill bit drawer and found a new method to bend small rounded sections of inlay. Could an old twist drill bit do the trick. I had to give it a try, so I locked the bit in a pair of vise-grips and heated away. Cool thing is that the bit – due to its size or to its solid body – was quicker to heat. That made the task that much faster.

I went about the bend just as I would using anyone of the steel pipes: wet my string pieces slightly, backed the bend using a piece of metal strapping salvaged from a lumber shipment that came to the shop, heated the bit then bent my string. Everything worked perfect. In fact, four bends later my inlay was ready to install. All I had left was to taper and fit the ends to try and hide the joint.

If you have string work in front of you that has small tight bends, give this technique a try. It works.